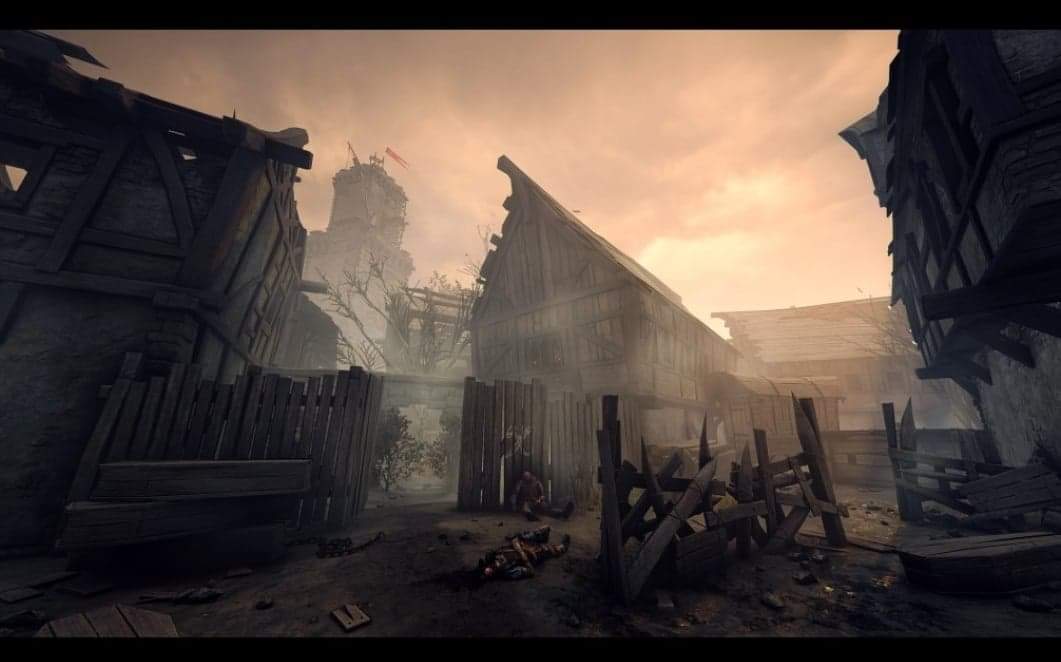 The sun has set in Bogenhafen, the cheers and celebrations from the last night of the Schaffenfest can be heard in the distance, as the fog from the river Bogen begins to roll in over the docks. The town is in chaos with the alarm raised, buildings on fire and lynch mobs but all is silent on the Ostendamm.
Inside warehouse 13, our party sit in darkness, having taken up positions amongst the crates as they wait for the ritual to begin. Werner and Rowlocks take front positions standing on crates, with Gnoblar and Wandy further back.
They wait.

At about 7 or so, they here a coach arrive and the door opens. In comes, who they now know to be Steinhager, and two bruisers. The heavies drop a sack and leave and Steinhager begins to set up the the ritual.
They wait in the darkness.

After a while, Teugan and the other merchants arrive, they chat and begin to get their robes on. The party are getting twitchy but..
They wait

More heavies arrive and drop off a sack. A sacrificial woman is bound and gagged and after a while brought to the centre of the pentagram. Things are ramping up now as the cultists take their positions and begin to chant. Teugans in the middle standing over the victim.
They’re seriously thinking about it but…
They wait.

The chanting reaches a weird, loud discordant cacophony, Teugan begins to raise the knife high up in the air over the dark haired woman and…
THEY DON’T WAIT!!

THWANG Rowlocks unleashes a shot from his Elven bow and hits Steinhager in the leg. Another shot rings out from Wandy in the darkness at the back of the warehouse and hits Teugan in the shin and he drops to his knees. Teugan looks round in a panic as the chanting stops. Werner jumps down from the crates and charges the inconspicuous man standing near the door and slashes him wildly with his axe hitting him in the shoulder! KERTHUNK
Teugan stands and him and Gideon, who Werner just wounded, begin incantations and gestures.
A few moments later, both Rowlocks and Werner are drooling, gibbering idiots, licking the crates and picking dirt up off the floor.
Teugan yells his friends to avert their eyes as Gideon begins a grotesque metamorphosis from man to winged demon. The merchant cultists all listen to him but one, who is frozen to the spot in fear. Gnoblar cant see from his position, but Wandy witnesses the change. Wandys not fucking scared of demons. 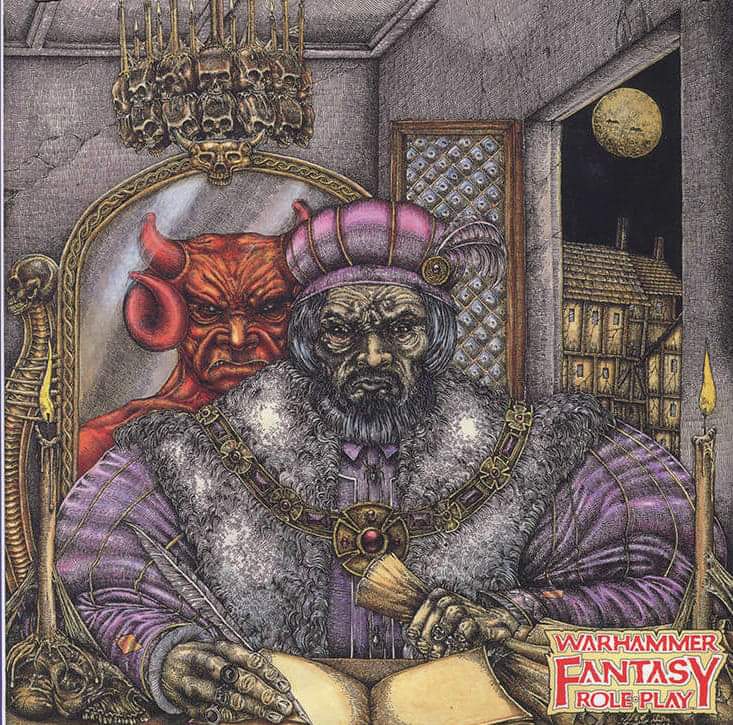 Gnoblar stealthily makes his way across the warehouse and tries to shake Rowlocks out of his state. Wandy fires his crossbow again but the bolt whistles into the wall. Gideon runs to the back of the warehouse screeching and snarling. He scans for threats.
The cultists begin to bottle it and start heading to the door. Teugan is almost hysterical as the holds the door shut and screams for them to remain and finish the ritual. Steinhager and Teugan have a row.
Rowlocks begins to come round as Gnoblar throws down his crossbow and grabs his sling. He winds it up and unloads a sling bullet which flies straight for Gideon and hits him between the eyes.
Gideon sees Gnoblar in the darkness and unleashes a fireball towards him. Gnoblar is officially the luckiest halfling in the Empire as it just manages to singe him as he dives behind a crate. Meanwhile, the cultists try to push and pull Teugan from the door.
Werner finds a small beetle on the floor squishes it up his nose.

Rowlocks brings himself to his feet, jumps down from the crates and charges Teugan whilst drawing his sword. Rowlocks dishes out the damage as he critically wounds Teugan, slices his finger off and blood splurts all over the shop. Teugan screams and once again drops to his knees.
Another bolt from Wandy whistles through the chaos.

Gideon races back to where the action is and immediately starts to attack Rowlocks cutting him deeply with his claws.
Teugan writhes around on the floor bleeding and shouting.
Wandy and Gnoblar rush to the front of the warehouse. Gnoblar tries to snap Werner out of it but Werner’s having none of it. Wandy checks the girl, looks at Teugan and joins the battle with Rowlocks against Gideon. Surprisingly, Wandy hits Gideon with his sword and hurts him. Gideon hits back wounding Wandy. He then takes a chunk out of Rowlocks arm injuring him heavily. Gnoblar joins the fray hitting Gideon.
Steinhager and the rest of the panicking cultists throw open the door and flee out onto the dockside. Teugan bleeds out, the girl is paralysed with fear and Werner starts to wake up.
Rowlocks, clutching his gashed arm, swings at the hell beast and connects with an almighty blow, cutting deep into his flank and putting the bastard down!
Now Werners mad. He grabs his axe and walks slowly and purposefully towards the contorting demon.
Gnoblar unties the girl as Wandy tries to speak to Teugan. Teugan bleeds out.

Werner grabs the fiend by a horn, raises his axe high and brings it down clean slicing the head from the monster.
Gideon’s bodie smokes and bubbles as it
becomes a screaming vortex that siphons up the world around him.
Thugs from outside the warehouse appear and start to look at each other confusingly whilst surveying the scene.

The heroes begin their exit strategy. Grabbing their stuff, they try to take the unwilling sacrificial victim to the door. She is out of her mind with trauma and is proving difficult. Rowlocks’ wounds are pouring and he is heavily wounded and in pain, Gnoblar is burnt and Wandy is injured.
QUICK! To the dockside to steal a boat!!

They leave the girl and rush to a small rowing boat, Rowlocks drags himself aboard, Gnoblar follows and begins to immediatly bandage him up. The town watch are streaming down the main street to the docks as more thugs appear! Wandy and Werner sprint to the boat, Werner jumps in and starts rowing like fuck. The watch swarm the wharfside and there is shouting, screaming, bells ringing and a whole host of carnage.

The rowing boat is about 10 ft from the dockside, when, out of the fog comes a whelping which turns to a bark. Standing on the edge, with sad dog eyes on full blast is Elvis, Wandys friend from the Schaffenfest!
The boats pulling away when Werner stops rowing and looks at Wandy. Rowlocks is bleeding out with Gnoblar furiously trying to staunch his wounds. Werner and Wandy, despite the immediate life threatening danger begin the “here boy, come on boy, come on Elvis, here boy!” process.
Hes thinking about it, the river bogen is black and rolling, Werner starts to grab a rope, the watch are heading their way screaming for them to halt.
It’s a 50/50, will he or wont he, then, at the last possible second, Elvis plunges into the darkness and doggie paddles to the boat. Wandy grabs him, Werner again rows like fuck, Elvis shakes and sprays the team with Bogen water, the watch and the people on the docks continue to shout halt! as the small rowing boat disappears into the darkness and the fog.

The lights, noise and smoke of Bogenhafen begin to retreat into the darkness and soon become a dot on the horizon, as Werner pulls the group further down the river. For the first time in a long time our heroes draw a breath.
They made it.

Werner (with a little help from the others) rows through the night.
Bogenhafens most wanted (three counts of murder, arson, theft, resisting arrest and a host of other offences) see a peaceful sunrise on the river, the birds tweet and the wind rustles through the forests on either side.
Just as they begin to relax, they see a body floating towards them riddled with crossbow bolts and they are once more on their guard.

Round a bend in the river they see a barge, apparently adrift. No signs of life.
They tentatively bring the rowing boat along side and they all hop on apart from Werner.
Within seconds they are set upon! A winged beastman swoops from the trees as two wounded other beastmen burst from below. Wandy is pinned in by the winged bastard as heavily wounded Rowlocks finds himself, once again, in battle.
Werner jumps onto the barge and begins to unleash his pent up bodyguard frustration.
Wandy is wounded by the winged mutants spear as tentacles burst out of the water and try to drag Gnoblar down into the murky depths – he evades them skilfully!
Werner and Rowlocks start taking chunks out of the beastmen as Gnoblar once again evades the thrashing tentacles from the river.
Seeing the tide of battle turn, and nursing their wounds the beastmen turn and dive into the water fleeing the scene.
The party take stock, the barge is littered with bodies. They begin the rifle through the corpses and shove them into the river when they hear a sound from below.
They head down, weapons drawn, and they find, hiding in a box, a terrified woman.
They reassure her, bring her upstairs and she introduces herself as Renate. She is incredibly grateful and informs the party of the events on the barge when the beastmen attacked.
The, wounded, exhausted, dirty, smelly outlawed, and generally fucked group of ragtag friends sit in the morning spring sunshine. Wow. What a few days it’s been
Rowlocks decides that the outlaw life might just suit him after all…
session ends 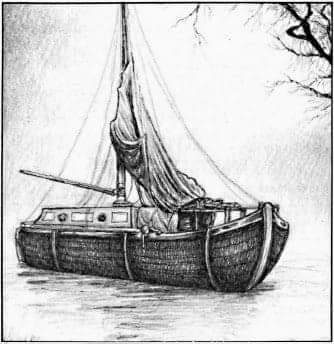 Session 8 Off to see the wizard!

Session 7 All aboard the Jolly Nobber